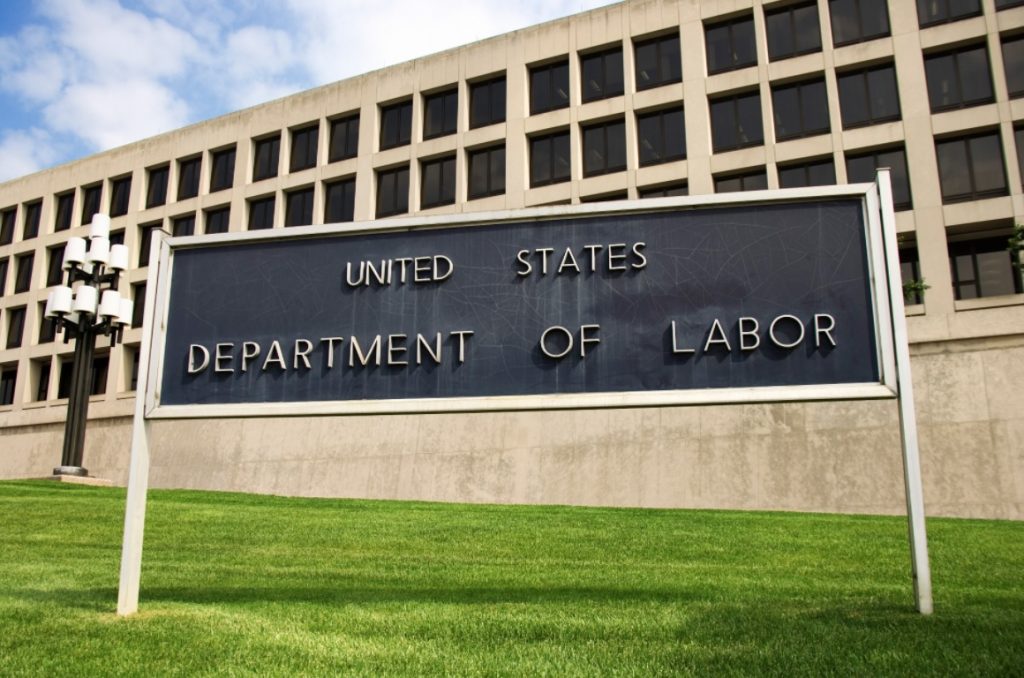 The proposed amendments (the Proposal) are summarized below. Comments are due to the DOL by Sept. 26, 2022.

The QPAM Exemption provides broad relief from the prohibited transaction rules. Where a QPAM complies with the terms and conditions of the Exemption, the QPAM is permitted to transact on behalf of a plan or IRA without having to verify whether a counterparty is a party in interest. Because of the broad relief that the Exemption provides, it has become common practice for managers to make representations regarding their QPAM status in agreements with clients and service providers.

Summary of the Proposed Amendments

The proposed amendments would:

The DOL would be able to make annual adjustments for inflation to the thresholds.

These amendments would significantly impact entities that rely on the QPAM Exemption, as well as plans, plan fiduciaries, counterparties to transactions involving QPAMs and others. The amendments would impose significant compliance burdens and costs on QPAMs, including the need to amend existing agreements to comply with the conditions. Additionally, the indemnification and hold harmless provisions are likely to increase the potential liabilities of a QPAM that becomes disqualified. The DOL proposes that a final rule would become effective 60 days after publication in the Federal Register. Interested parties should consider submitting comments to the DOL.

1 Similar prohibitions apply with respect to individual retirement accounts under Section 4975 of the Internal Revenue Code. The QPAM Exemption is available for transactions on behalf of such accounts, as well. 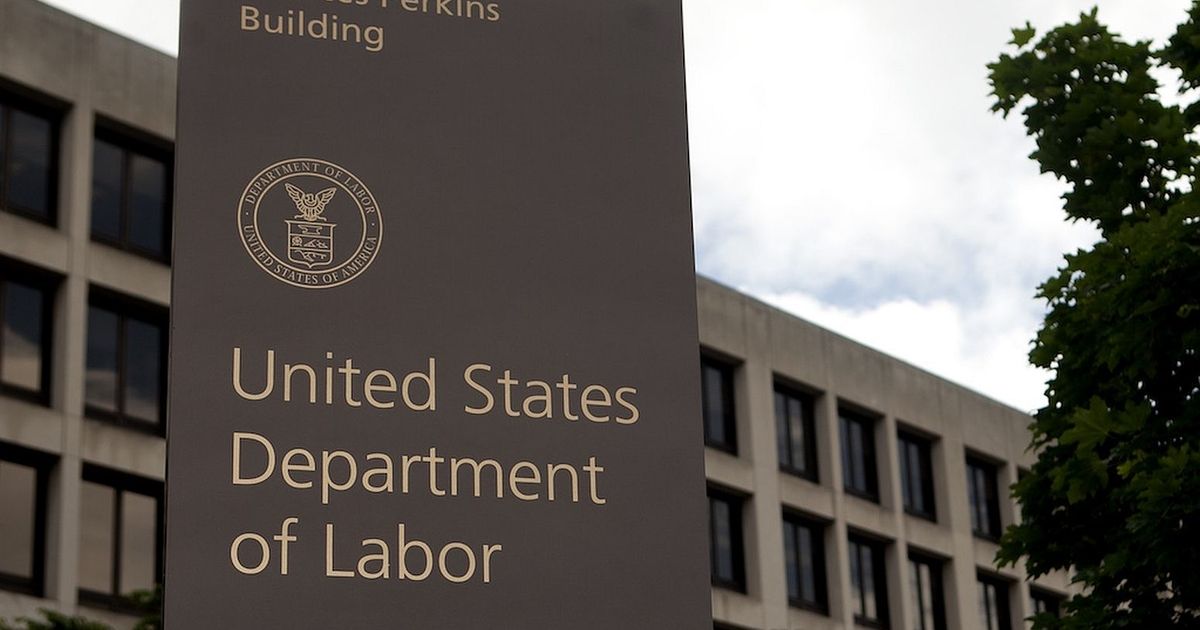 The Labor Department warned plan fiduciaries against the perception that private equity is generally appropriate in 401(k) plans. 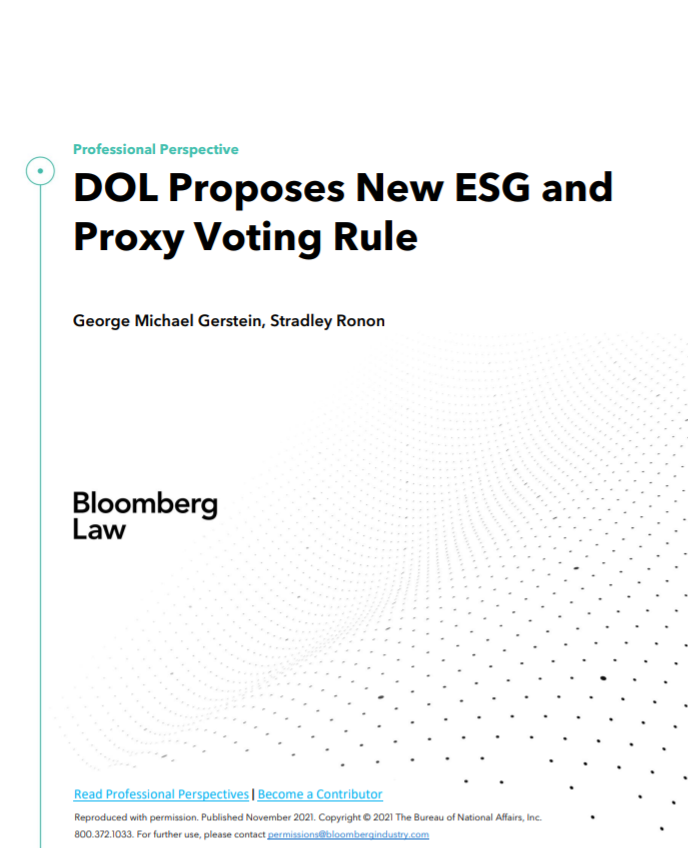 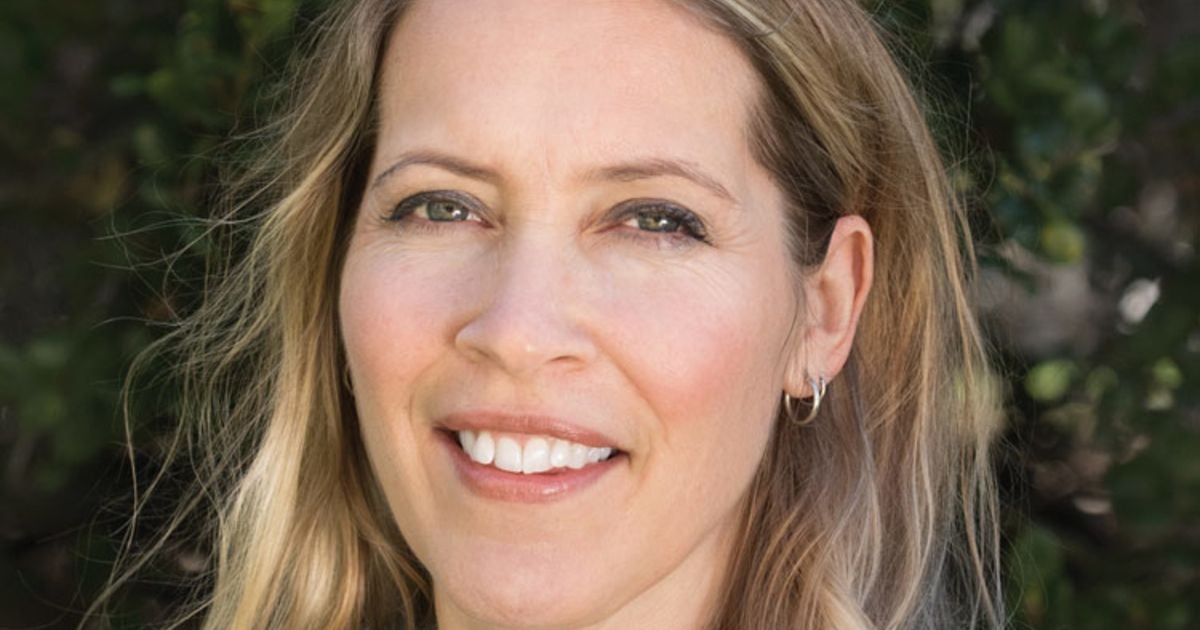 New guidance from the SEC gives shareholders greater ability to get environmental and social issues onto company proxy ballots. 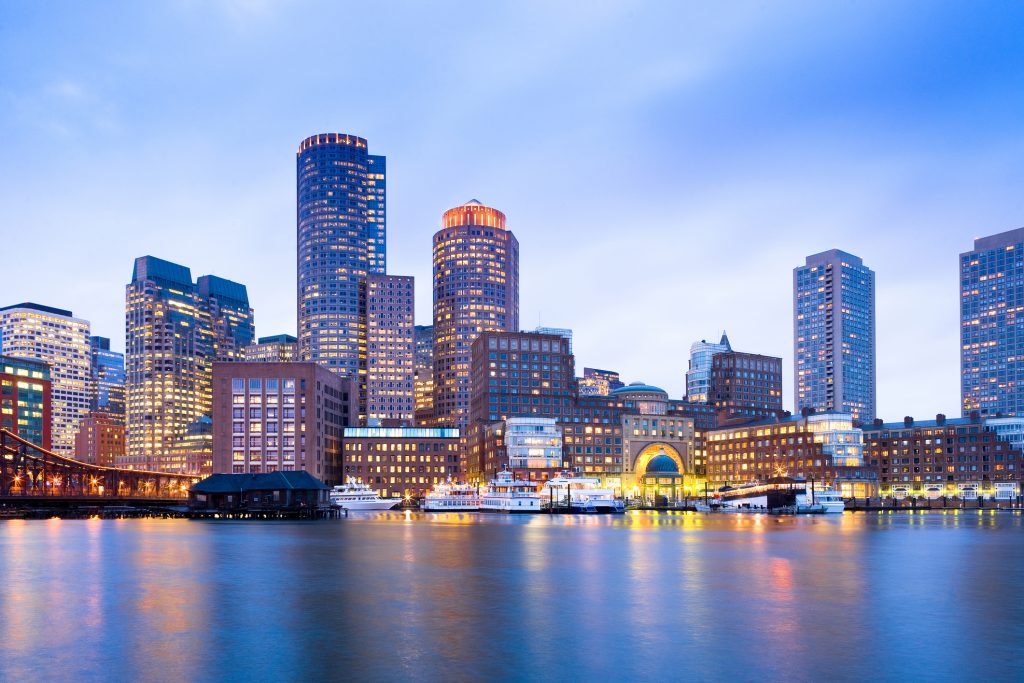 George Michael Gerstein will present a webinar to BASIC – Building A Sustainable Investment Community – Boston on the new US Department of Labor ESG and proxy voting rule proposal. This webinar will be available via Zoom. 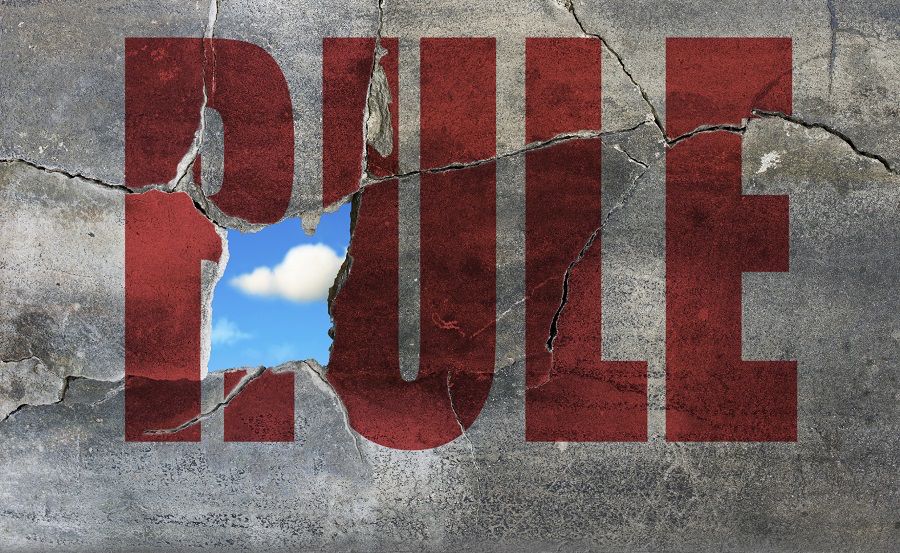 Most brokerages continue to demonstrate conflicts of interest when recommending investments to retail customers, a NASAA study shows. 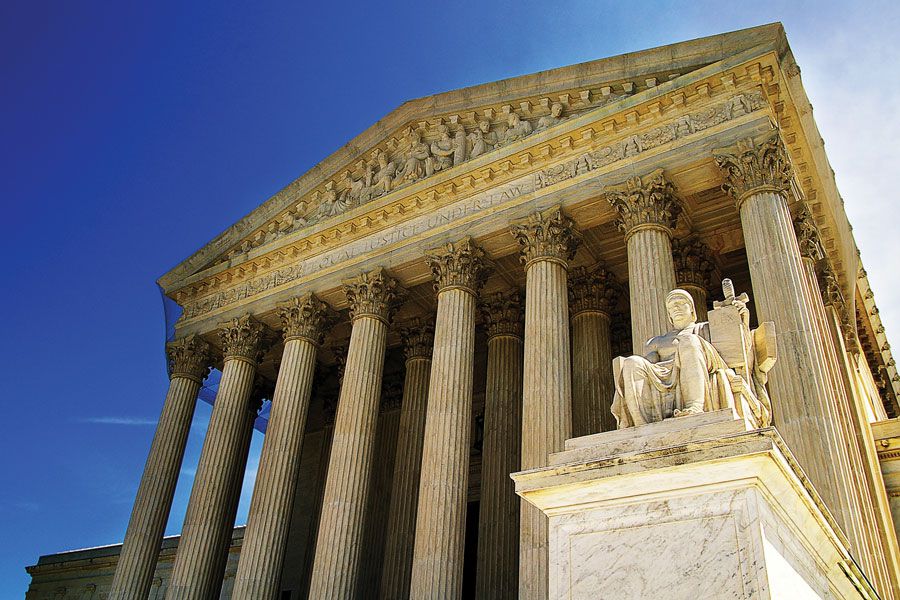 Northwestern SCOTUS case could decide fate of many 401(k) lawsuits

Trade groups and other entities have been flooding the court with briefs in support of Northwestern and in at least one instance against it. 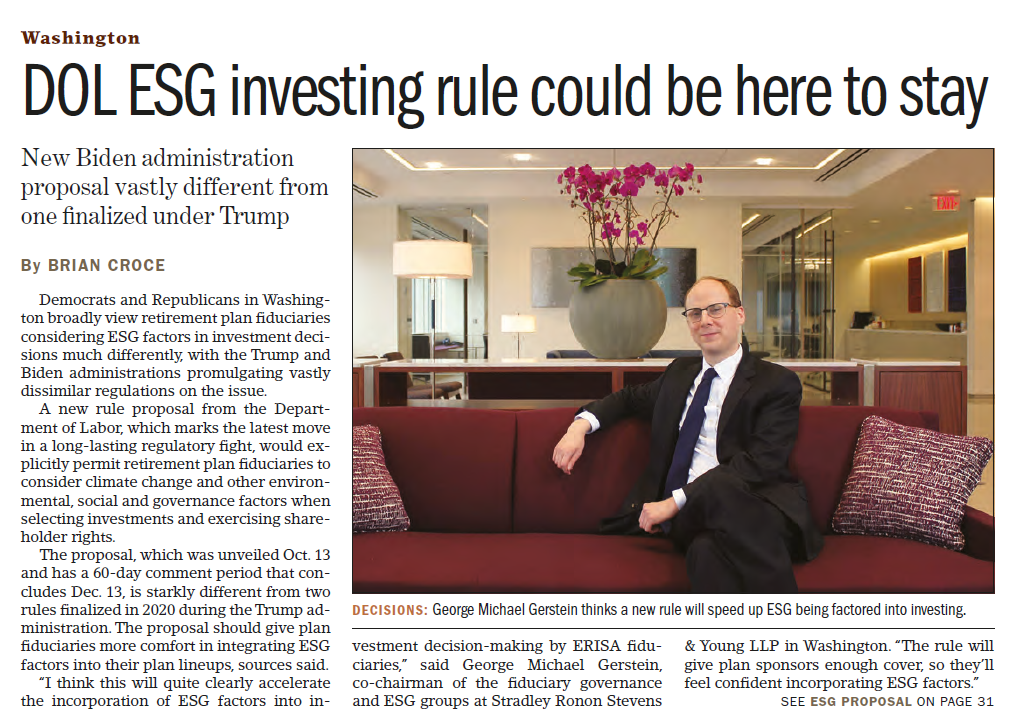 The full Pensions & Investments article can be found here. 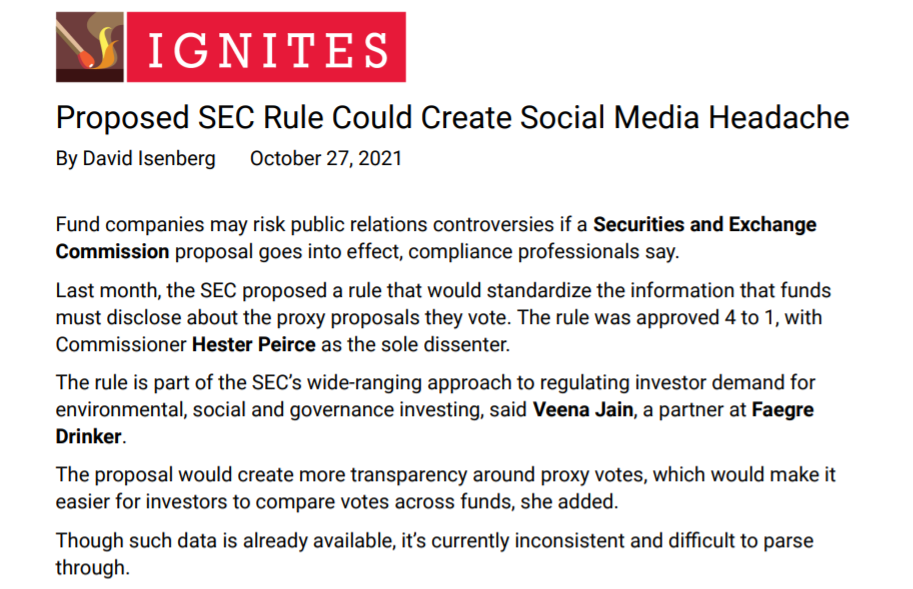